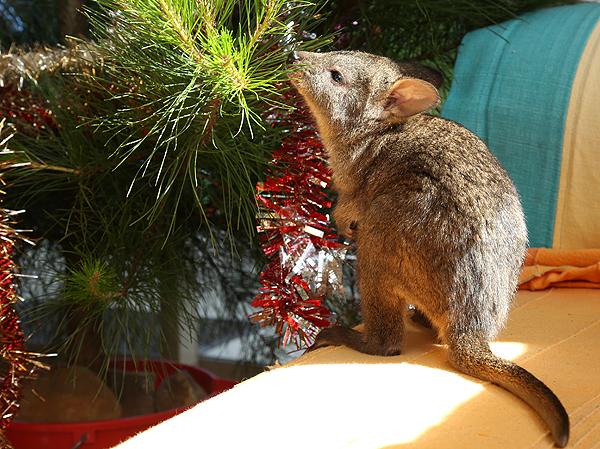 We’ve said goodbye to last year’s ‘crop’ of babies: Monday, Morinna and Mangana, the Tasmanian Pademelons, and Mac and Monique, the Bennett’s wallabies. They've now made their home in the greater Inala landscape. Monique was the most reluctant to go and spent the first few weeks of her release either in the office, in the shed (creating quite a stir as unsuspecting guests went in to use the facilities and found a wallaby in the toilet cubicle!) or loitering in the carpark. She has now made some new friends though, and can often be seen around the Forty-spot canopy platform. Her pen-mate Mac took off and joined the wild mob immediately without a backward glance at his sister! He doesn’t seem to be hampered at all by a lack of a full tail (if you recall, it was damaged in the accident that killed his mother).

Our customer services manager Julie has now taken-on an orphaned Bennett’s wallaby, which she has named Marley. Just a couple of days ago, Marley has been joined by Harry, another Bennett’s reared to this point by fellow carer, Kay. They each needed a friend so this seems to be a perfect solution. The annual cycle of changing pouches and warming feeding bottles continues…..

You may remember Spike, the orphaned baby Botched Bluetongue Skink. No pouches have been required for him but he's got a cosy home nonetheless. He is doing really well and, since coming out of hibernation, has not stopped eating and growing. He is getting close to a size where we can safely release him without him immediately becoming breakfast for the nearest Kookaburra or raptor.

Many thanks to all who have contributed to the wildlife care fund either by purchasing merchandise or visiting the Jurassic garden and museum.

Morinna has actually made it all the way to Italy! She popped up in a couple of artworks produced by Daniela, which went on exhibition in Prato, just outside Florence. If you'd like to see what they look like, you'll find them here.