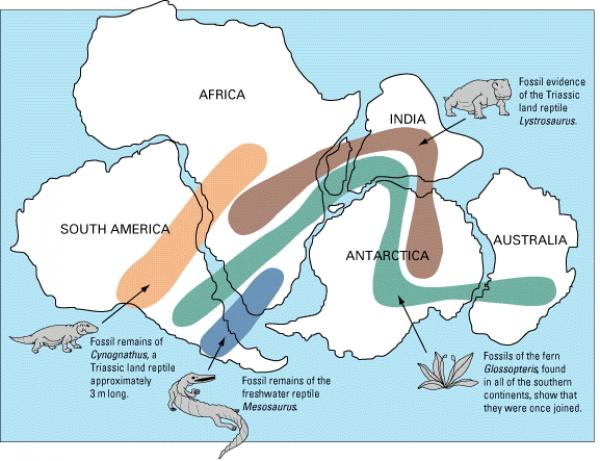 The theme of Gondwana is a passion of Tonia's. It runs through many Inala's tours and the Inala Jurassic Garden.

• The supercontinent Gondwana was made up of the southern continents (South America, Africa, Australia, Antarctica), India, New Zealand, Madagascar and many smaller blocks of land

. • Gondwana persisted as a single land mass until it broke up in stages from the late Mesozoic to early Tertiary. • Separation of South America and Africa gave rise to the South Atlantic Ocean

. • The last continents to separate were Australia and Antarctica

. • Opening of the Drake Channel (between South America and Antarctica) and the Tasmanian Seaway (between Australia and Antarctica) allowed the formation of the Antarctic Circumpolar Current, which caused Antarctica to freeze. • Evidence for the existence of Gondwana comes from geology and biology, including fossil and modern species

. • The flora of the southern continents is partly derived from an ancient Gondwanan flora shared with Antarctica

Continents are not static. They are part of giant tectonic plates that are shuffled around the Earth’s surface by currents of molten rock. The molten rock (magma) rises from deep within the mantle. As it reaches the surface, rising magma is pushed sideways, moving away from the point of origin. These currents push and drag around tectonic plates. They don’t move quickly – maybe 5 to 8 cm a year – but the history of the Earth is so long that the plates and their associated land masses have wandered all over the globe, colliding and separating many times.

The original version of Gondwana formed between 800 and 530 million years ago, with the accretion of the southern continents (South America, Africa, India, Australia and Antarctica). Towards the end of this period, multicellular life arose in the shallow waters along the continental margins.

Then about 335 million years ago, during the Carboniferous period, all the land masses docked to form Pangea. This persisted for 165 million years, until Pangea started to break up in the Jurassic period. The northern block peeled away from the southern block, allowing the Tethys Ocean to spread from east to west. Now separated by an ocean, Laurasia (North America, Europe) and Gondwana moved further apart. The Tethys Ocean encircled the Earth just north of the equator. This was the second version of the southern supercontinent. It began to fragment at the junction between Africa, South America and Antarctica. It is believed that the first stage involved massive eruptions resulting in flood basalts covering vast areas of southern Africa and Antarctica. As part of this process, smaller blocks of land, including the Falkland Islands, Antarctic Peninsula and Zealandia (New Zealand and islands) rifted away from Africa and South America.

South America and Africa then peeled apart from the south to form the South Atlantic Ocean. At this stage, South America was still in contact with Antarctica. Following this, India and Madagascar broke away from Gondwana, with Madagascar remaining close to Africa, and India drifting north to collide with continental Asia. This contact between the Indian and Eurasian tectonic plates pushed up the Himalayas.

South America, Antarctica and Australia remained in contact until the final phases of the break up of Gondwana around 40 million years ago. The opening of the Tasmanian Seaway (Australia) and Drake Passage (South America) allowed water to circulate uninterrupted around Antarctica. The Antarctic Circumpolar Current, which connects the Atlantic, Indian and Pacific Oceans in southern latitudes, acts as a barrier to southward-flowing warm currents, so lowering the temperature and promoting the development of an ice sheet over the Antarctic continent.

By 23 million years ago, Gondwana no longer existed as a geological entity, but its legacy remains in the fauna and flora of the southern continents.

The similarity of plants and animals in widely separated continents intrigued 19th Century scientists. Was this similarity due to dispersal across vast expanses of ocean or the result of another process?

British botanist Joseph Dalton Hooker, who travelled to Antarctica on the Ross Expedition (1839 – 1842) and was familiar with the floras of the southern continents, wrote to Charles Darwin in 1851:

Adolf Engler, botanist at the University of Berlin, suggested that the similarity of plants in the southern continents pointed to them having once been part of a single flora thriving in a cool to mild humid climate. This must have included Antarctica, so Engler named this plant community the Austral Antarctic Flora. His hypothesis was confirmed when the first plant fossils were collected in Antarctica. Among the specimens found were fossils of Glossopteris and Nothofagus. Two elements are recognised in this Gondwanan flora: A Tropical element found in tropical South America and Africa, and an Austral element from southern South America, southern Africa, Australia, New Zealand and western Pacific islands.

Glossopteris is a genus of seed-producing plants. It existed during the Permian (250 – 300 million years ago), becoming extinct at the end of that period. Glossopteris fossils are found in South America, Africa, Antarctica, India, Madagascar, Australia and New Zealand – all Gondwanan landmasses. Its occurrence on Antarctica was revealed by fossils collected on the Terra Nova expedition (led by Robert Falcon Scott).

The discovery of Glossopteris fossils confirmed that not only had Antarctica once been warm enough to support a rich flora, but also that it had been connected to other southern continents. The southern beech genus Nothofagus was an important component of this Antarctic flora. The genus has a long history dating back to the Cretaceous period. Nothofagus fossils have been found in Antarctica and living species grow in South America, Australia, New Guinea and New Zealand. There are no records from Africa and India, which had broken away from Gondwana by the time Nothofagus appeared in the fossil record.

Although much of the Gondwanan flora originated and persists in temperate rainforest, there is also an extensive heathland component. Plants of the family Proteaceae reach their highest diversity in Africa and Australia, where they occupy heathland and other habitats with nutrientpoor soils. The evolutionary history of Proteaceae is complex, with the family probably arising in rainforest, then expanding into drier areas multiple times and diversifying. Other significant elements of the Gondwanan/Antarctica flora include conifer families Podocarpaceae and Araucariaceae, and flowering plant families Cunionaceae and Winteraceae. Nothofagus forest in Parque Nacional Huerquehue, Chile.

Whereas Glossopteris and Nothofagus are key plants involved in unlocking the story of Gondwana, several species of prehistoric animals have also contributed. Mesosaurus and Stereosternum are among the oldest aquatic reptiles, appearing early in the history of terrestrial vertebrates. They lived in South America (Uruguay, Brazil) and Africa (Karoo Basin) during the late Palaeozoic. Along with Cynognathus, one of the ‘mammal-like reptiles’ of the Mesozoic, which occurred in the same areas, the mesosaurs are considered iconic Gondwanan taxa.

The strongest indication of Gondwanan connections in modern animals comes from groups such as land snails that are not efficient at dispersing over wide distances, especially across oceans. Several Gondwanan snail families are found in the southern continents. Rhytididae are carnivorous snails that occur in South Africa (S of 23°S), Australia and New Zealand. This distribution suggests an origin for the family before the supercontinent started to break up. A more widespread family of land snails, Bothriembryontidae, has a similarly ancient origin. It is found in South America and southern Africa, Australia, New Zealand and New Caledonia. The South American and African genera form one closely related group, and the Australian-Pacific genera form another.

The name Gondwana[land] was coined in 1885 by Austrian geologist Eduard Suess, who hypothesised that the continents must once have been connected by land bridges, which were later inundated by ocean. (Gondwana is Sanskrit for ‘land/forest of the Gonds’, a cultural group living in the area of India where much of Suess’ geological material originated.)