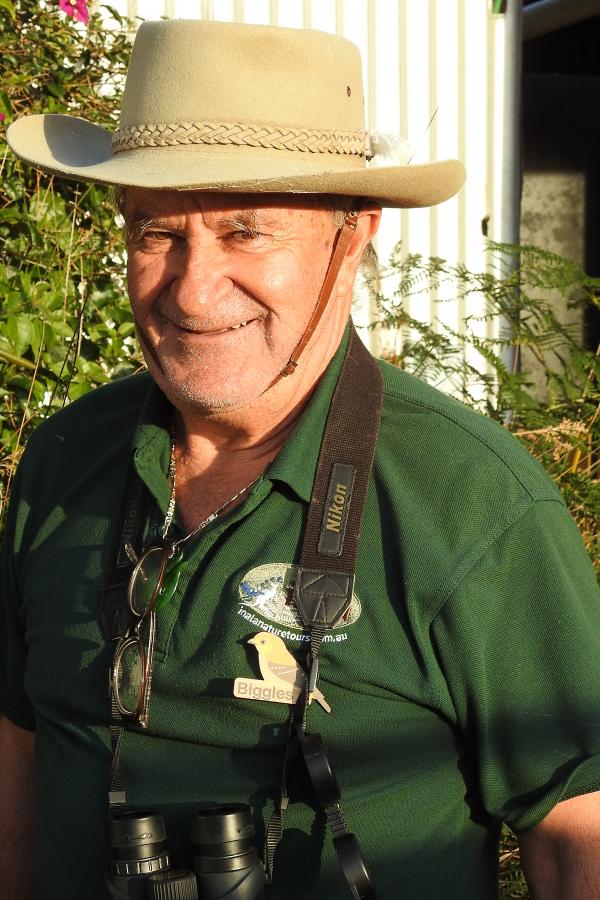 Darryel Binns is affectionately known in the birding world as “Biggles” (or just Biggs in the Inala office). He was born in Launceston and grew up in Pyengana in northern Tasmania and has been a birder since he was a child growing up in ‘the bush’ in that area.

Biggs is a Vietnam war veteran and was wounded twice by landmines whilst on duty there as a field engineer (1969-1972). On this return to Tasmania, he then joined the building trade which led to a position as a Parks Ranger with the Tasmanian National Parks Service near Lake St Claire in 1979, followed by various other Ranger positions in almost all of Tasmania’s National Parks; this included 3 years on sub-Antarctic Macquarie Island over a 5 year period between 1985-1990, where Tonia first met him when she was working there as a marine biologist in 1986. Biggles moved to Darwin in 2003 for health reasons resulting from fire-fighting duty; their paths crossed again when Tonia was looking for a Darwin-based birding guide and Biggs became a member of the Inala guiding team in 2007.

Biggles is best known as one of the top birders on the Australian Twitchers list, with a total of 860 Australian species (and still counting). However, he also has in-depth knowledge of butterflies and wildlife and many ‘bush skills’ learnt over a life-time of being in the field. He has guided for Inala in many areas of Australia, especially of course around his long-term home around Darwin, the Top End and into the Kimberley.  He now also spends part of each year in Vietnam with his wife and her family.

"Hi Tonia, Just a note to let you know how much we enjoyed our recent tour with Biggles.  We enjoyed every single day with new birds all the way.  The Lake Argyle cruise was a highlight and absolutely beautiful.  We thoroughly enjoyed everyone’s company and found Biggles to be a great leader and lots of fun."  Val. 2017

"Hi Tonia and Co at Inala, Just a quick note to thank you for this trip – one of the best birding tours I’ve been on. Biggles was an excellent leader who found virtually all the specialities for us. I think I can speak for all the group and say that we all enjoyed it immensely. Thanks again" Brian 2017